MY GOAL IS THE ELDERS TO THINK ABOUT THE FUTURE, SAYS THE PHYSIOTHERAPIST WITH IMPAIRED VISION FROM GERIATRIC ACO ZANEV 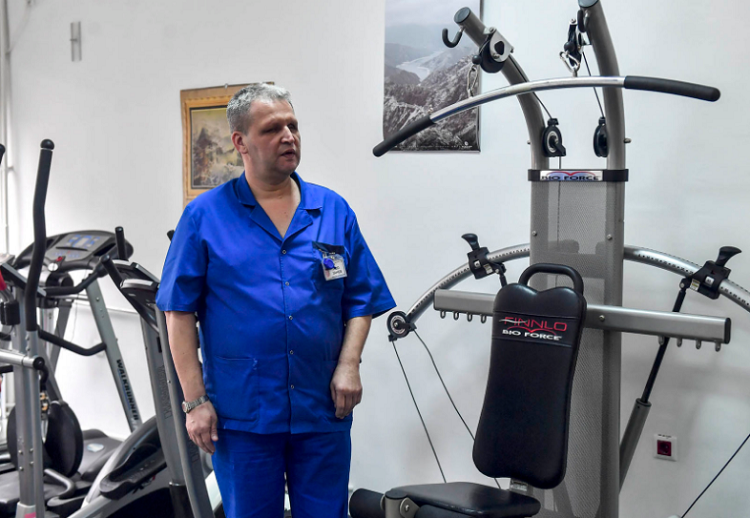 Physiotherapist Aco Zanev is a visually impaired person who has been employed for thirty years at the Specialized Hospital for Geriatric and Palliative Medicine "13 November" in Skopje..

"It is a lifelong desire for me to be a physiotherapist, I am and I think I am successful," he says.

Zanev completed his secondary medical education in Belgrade in 1990 and after six months was employed at the Hospital, then Geriatrics, and in 2013 graduated from the Medical Faculty in Stip, Department of Physiotherapists.

"I grew up in Geriatrics," jokes Zanev. 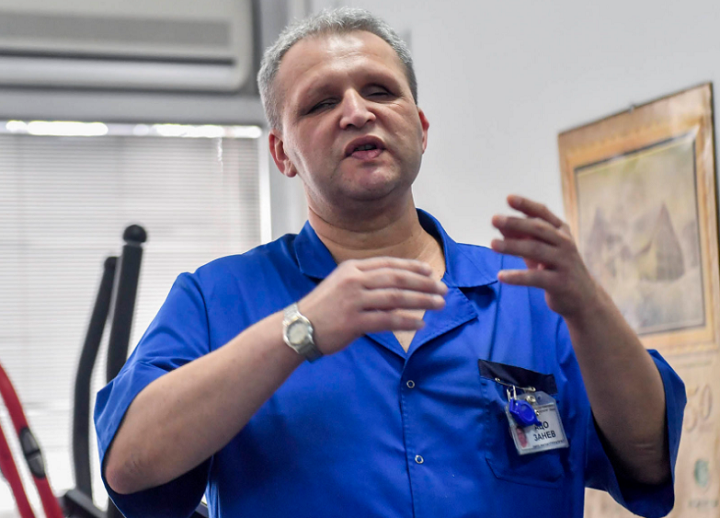 Zanev says he used a computer with voice commands with a screen saver throughout his education, and he found it particularly useful that all professors at Stip University wrote their literature in electronic form.

He works kinesiotherapy, which he says is part of physical therapy where the physiotherapist applies exercises to patients. Active, actively aided and passive exercises, exercises on diseased limbs, stripped limbs and those with paresis. Zanev works physical therapy with patients with lower extremity, left and right extremities, and quadriplegia.

"In principle these are patients who are housed here in the geriatric ward, most often the elderly, and the prevention of any physical therapy is prevention of decubitus (sores), prevention of immobility. Physical therapy helps to make one think more about themselves. There are old people who are simply falling into apathy and think that old age has come. The physiotherapist, at least for me, to my procedure means, is to always divert the patient's attention to the other side, to think of something else, of another sphere of life from the past, to make him think of the future. Simply put, the problem he has in life is to solve it. To make your every visit interesting and desirable, "Zanev told us.

Zanev said that in the hospital he is the only person with a disability, and that the visually impaired work at the Kozle Institute for Medical Rehabilitation.

"The treatment of those physiotherapists out there is quite different, somehow they are tied up in a towel that the physiotherapist who doesn't see can only do massage. I disagree with that. We all through education have gone through the same treatment, learning and literature, the same practical parts, more or less through the same education system. There is a different treatment, not that I agree or disagree. I don't even think about it because there is another treatment here, acceptance. Not that the life of a person with a disability is easy, but that's it, somehow you have to get used to the bigger burden of life. At least we live in such a society, "says physiotherapist Zanev.

From years of experience at the hospital, he says he had a patient a year ago at Sue Ryder who had a hip fracture and was stationary.

"She had a great desire to get up and live. He went home with persistent work. Which is proof that it is not true that people come here and do not return. This is an institution where people can get well, and get well and go home, "Zanev told us.

You can read the original text here 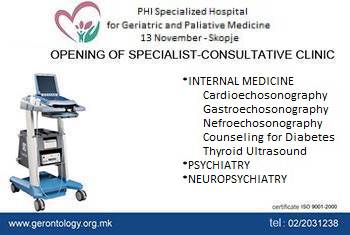